More flames await you: two more from the top (you should be okay just running along the bottom platform, but prepare to stop if your timing is off) and then a hellish sequence of side – firing flames on small platforms. You need to duck while they are firing, then run or jump in the second between flame cycles. The only thing that you have going for you is that if you move fast enough, you can often pass two close flames at once before having to duck and wait again.

There is also a few soldier trying to shoot you every so often, just to make things interesting. The saving grace is a ” B ” power – up that appears right in the middle of a top – to – bottom jet of flame on your way down from the second duck – and – jump series. Get that, and the next stretch will be SO much easier… but watch out, because there’s a side – to – side jet at the bottom that makes it very difficult to time correctly.

If you miss it, the rest of the level is more tricky than what you have already been through. Timing jumps and flames, and avoiding bullets, will seriously tax your skills. I know players who stop completely if they miss that ” B ” power – up, others who won’t try to get it because of the difficulty, but I also know for a fact that it can be done. 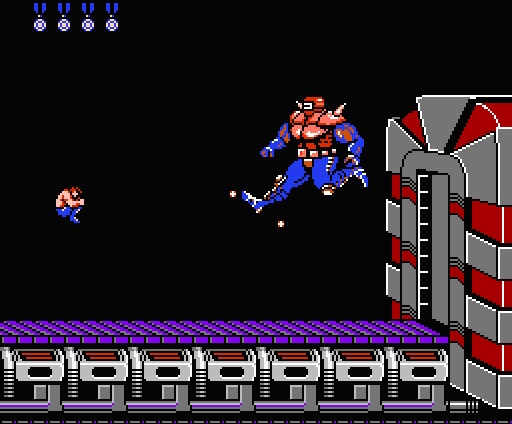 Luckily, your reward for getting past all that is the next boss, a humanoid robot (or maybe a dude in battle armor). He’s fairly easy, if a bit unpredictable – – he mostly moves back and forth, but sometimes jumps around too. Just shoot him and jump over him when he comes too close. If you take too much time, he will lay down little rolling mines on the floor; these can be a pain to shoot or avoid. His pants will change to purple as he takes damage, and then red when he is really hurting.

Somewhat similar to the last level; you will be able to choose high road or low road in some places (the high road is usually slightly easier), and the death from above comes in extending claws this time. The good news is that the claws are easier to deal with than the fire, because they maintain regular patterns that you can memorize.

Once you get past the first batch of claws, there is an ” F ” power – up (it’s up to you); after the second batch, an ” R ” (rapid – fire, so get it). Right afterward, there is a stretch of platforms that send up spiky walls, but these can be destroyed or (if they’re low enough) jumped on and over.