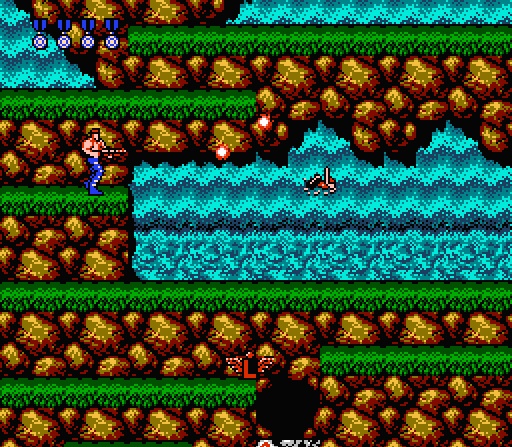 Start at the bottom and work your way up. Among the hazard are Dig-Dug-style falling rocks that will kill you (what doesn’t?) — as soon as you start seeing them, there should be an “F” and then a “L” power-up in the vicinity.

Up a ways, you’ll see a metal bridge platform with moving flames; as you approach, a pair of floating power-ups appear (left is “B” as in Bulletproof, the right is an “R”). Grab both, if at all possible. the Bulletproof WILL protect you from the flames; otherwise, you’ll need to jump them.

Keep going up and things get more difficult with small moving platforms, enemies hiding in the waterfalls, and progressively less ground and more turrets and soldiers overall. Look for an “S” power-up and then an “M” power-up before you get to the top platform.

Once you’re at the top, jump up to make sure to reveal the whole area and cause the boss to appear. Looks like “Alien” to me (“Game over, man, game over!”), but he’s actually not too tough. The hardest part is dodging all of the spiraling fireballs. You can shoot off his flailing fire arms to make it easier on you, but to kill him dead you need to shoot him in the head when his mouth is open. Jump through the hole to the next level…

Another 3D Base level, with eight rooms this time.

The locks are armor-plated this time around, so destroying them takes longer. The first room has a pair of turrets and some of those annoying rolling-pin things. Enjoy it, because it just gets worse; the second room has FOUR armor-plated locks; you need to duck to hit them, all while jumping over more rolling pins and getting out of the way of grenade bursts.

The third room has only two armor-plated locks and one turret. And rolling pins. Get through to the fourth room and you’ll find the same setup, but lower. The next room has two locks on either side of a central turret. Sixth room: one lock and rows of rolling pins (I have better luck ducking and shooting them, versus jumping over).

Speaking of jumping, the next room has a turret in the middle, under a lock that you’ll need to jump to hit. This can be kind of a pain, so take out the turret first to make it as easy as possible on you. Room Eight
has a big lock and three turrets, as well as rolling pins and grenades to worry about. You’re probably better off just shooting the lock and ducking when necessary, but feel free to take out any turrets if there’s too much heat.

Boss Room: finally, a serious challenge. There’s a big gun with moving shields and three glowing spots; if you shoot the spots, the boss will appear, so you may want to get the gun out of the way first (but you don’t need to — and enemies will keep showing up until you start fighting the boss!). 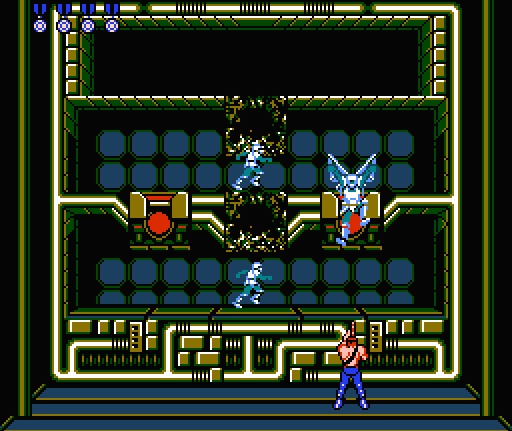 We used to call this boss “spasm helmet” because he has two helmets which turn into four ghostly helmets (and spasm all over the place). Just to make things harder, he’ll also shoot tiny bubbles at you (Don Ho?), which can be hit — but don’t waste the time trying. He’s only vulnerable when the ghost helmets come together (they’ll look a little more solid). Elevator to Stage 5…