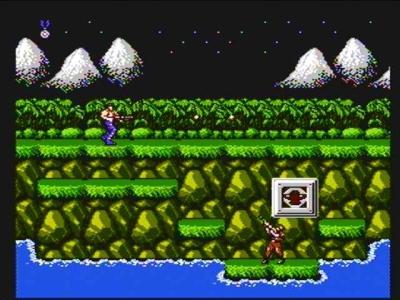 Of course the bridges will begin to explode when you step on them. Four well-timed jumps will get you across bridges, but falling into the water won’t kill you (during this stage!).

Be on the lookout for the enemy near the edge of the second bridge — and for his buddy hiding in the foliage. For your trouble, you get to grab the highly-coveted “S” power-up that floats by, which will make your life much easier…but if you miss it, there’s another chance soon, where the lower ‘water’ route rejoins the higher route.

You’ll then pass two more floaters, an “R” on top and an “L” below. I recommend just going for the “R”, but you Laser fans may have other ideas. After a few more pits and robots, you’ll get to the first boss.

Not much of a boss, really; a glowing orb-lock and some enemies. Jump up, kill the sniper at the top, jump down slightly and shoot the turret guns. Don’t get too close, or they’ll take you with them when they explode. Once the smoke clears, jump all the way down, duck and shoot at the glowing area until it blows up.

Get ready for 3D action (LOL)! Shoot your way through five rooms to reach the boss. Each room has a glowing lock that creates a sort of electric fence in front of you, as well as plenty of other dangers…

The first room has a lock in the middle; stay in front of it and just keep shooting it. There’s a ‘sweet spot’ in the middle where the enemies won’t be able to hit you. Once the wall breaks open, run forward into the second room. Here, the lock is on the left and there’s a turret on the right. Shoot the turret first (or just duck to avoid its shots), then stand and shoot the lock until this wall blows up. Run into the third room and you’ll see a center lock flanked by turrets, and enemies that sometimes throw grenades at you; avoid the explosions, duck the shots, and keep shooting the lock until this wall explodes.

The fourth room has a nasty twist; in addition to the turret, rolling pins of death will come at you out of holes in the wall. Shoot down at them or jump, but either way keep pelting that lock until the wall bursts open. Last but not least (and not even really last), the fifth room has a bigger, tougher lock…as well as three turrets and plenty of enemies.

Room six is the “Boss Room”. Shoot two turrets, four glowing orbs, and then a floating bubble-shooting boss. The bubbles aren’t a big deal (slow and shoot-able, especially if you have a decent power-up weapon), and the boss won’t take too long. Ride the lift up and into the next level.