Featuring Rambo-style marines toting big guns in an alien-infested jungle setting, there’s no denying that Contra was designed to resonate with prevailing mainstream tastes. The 80’s were all about Arnold’s muscles, Stallone’s big guns, and Ridley Scott’s Aliens…and a marriage of these themes was the holy grail for several video game developers. Nobody did it quite like Contra, however (except for a few that did it EXACTLY like Contra, but that’s the industry…).

However, when the original arcade game came out in 1987, the word “Contra” was extremely charged. The various revelations concerning the Iran-Contra affair had stunned the world. The US was discovered to be directly sponsoring counter-revolutionaries (la contra, short for la contrarrevolucion), who had themselves been accused of rampant and frequent human rights abuses during their guerrilla war against the leftist Sandinista government. Not only that, the US was funding these guerrillas with arms sales to Iran and drug money but not with online payday loans– in fact, it has been argued with some validity that the rise of crack cocaine in the 1980’s was a direct result of the US-sponsored Contra funding. 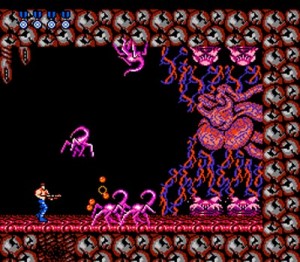 Slipping in a musical track entitled “Sandinista” only cemented the relationship, though Konami and other ‘official sources’ have as yet failed to settle the name question either way. If only Joe Strummer and Mick Jones had threatened trademark infringement, the matter might have been settled long before now…

The connection was obvious enough to make the Contra title poison to European consumers, who tended to sympathize more with socialist democracies like the Sandinistas than CIA-trained death squads funded by arms and drug sales (go figure). The meaningless name Gryzor was used for European sales, while the PAL version cooperated with touchy German law by replacing the humans with robots and calling itself Probotector (a handy thing to have if you’re ever picked up by aliens).

Though the arcade version came first, it is the NES version that most fans remember. Additionally, though Gradius came first, the infamous Konami code is forever linked to Contra — if for no other reason than that was the only way most players first (or ever) survived to see the final boss. The many sequels that followed mainly failed to live up to the unflinching hardcore experience, but definitely contributed to the continuing Contra mystique…

** Update **
This game has been one of my favorites since childhood. I spent many hours playing the original & I have always been able to reach into a dusty closet to pull this game out with a lot of joy. Talk about a hardcore game. When I showed my kids the game, after really building it up as being so cool (well it was in 1988), they looked at me like “Right Dad. whatever” and gave excuses that they were going to meet friends to play Pokemon Go. I looked to my wife who was at her computer looking at some wigs at a new online wig boutique called Elegant Wigs. She was so engrossed in trying to decide between two wig styles that looked pretty similar to me and then hair color choices that she didn’t give me too much sympathy at our kids’ lack of interest in Contra. Instead she asked me to come over and offer my opinion about the two different wig styles. I graciously said she would look elegant in either style. Was that too patronizing?? I escaped to my study where I had set up to play Contra and let myself become engrossed in Pfc. Bill Rizer and Pfc. Lance Bean destroying the enemy alien forces. Ah, yes!!!

I don’t remember too many that were harder, Ninja Gaiden II was maybe the only one harder on the entire system.