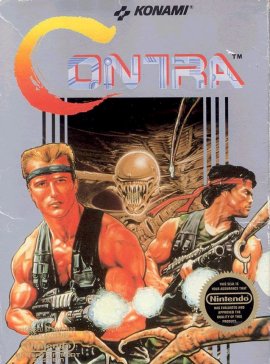 THE game for hardcore old-school gamers.

Contra ranks among the top video games ever; few before or since have come close to matching the sheer run-and-gun intensity of this NES classic. Forget save games, forget health boosts, even forget checkpoints — you get three lives, which means three hits from ANYTHING (enemies, bullets, a bad fall), which means you have to be better than good just to survive. You have to be among the best.

Beating the game was and still is a badge of honor among true gamers. You may be tempted to place the game along with many other (now nearly unplayable) titles of the 8 and even 16-bit days that offered simplistic gameplay, frustratingly crude controls, and less-than-awe-inspiring graphics. Sure, Contra has all of these issues…but it also has that elusive quality that raises it above the competition, above even many other fine games of its own era, into the short list of timeless gaming challenges, and shared experiences.

I showed Contra to my favorite aunt who lives in Australia, when she was visiting the states recently. I want to get her take on the game. It turns out she was familiar with Mario and Final Fantasy. Apparently my cousins really were into those two classic games when they were younger, but she was familiar with Contra. I think if she had lived in the states during the the era of Schwarzenegger, Stallone, Aliens etc, she would have appreciated Contra more. But she was game ( sorry for the pun) to give it a try. We spent the afternoon playing in 2-player mode for the afternoon. My dear aunt had a blast.

Not only did a lot of gamers share the Contra experience, many of them shared it at the same time, thanks to the relatively-rare 2-player mode (sorry, Gryzor…Euro versions lost the double-team action). Few arcade games and even fewer console games of that era offered simultaneous gameplay, and there’s no doubt that a pair of gamers with skills had a much easier time than a lone Contra.

For a short while, an organized Contra Tournament was sponsored by Acknowledge, and both single and team player versions were handled in round robin style. There’s very little information on this, but I did find a notice that Donald Fry won the singles title and found a photo of him showing off his sterling silver ring, which was the first place prize. The ring was engraved with the tournament metrics and was sold in Ebay years later for a paltry $25. You can still purchase an equivalent ring on SterlingForever.com the original online retailer. The sterling silver ring awarded in that competition is now an artifact of a bygone day where technology out paced the game development world so that newer, more compelling competitions on more technically robust games and platforms took over. And now with multiplayer online games, the world is entirely different. Still old Contra holdouts still enjoy the legacy game and some claim it’s much better than many of the newer ones.

Contra proved worthy of joining the highest ranks of classic Nintendo royalty, along with Mario, Zelda, Final Fantasy, Castlevania, Mega Man, and Metroid (come to think of it, that’s a pretty big list…did even the mighty PlayStation line spawn so many iconic games?). However, Contra is the indisputable badass of the bunch, a seriously butt-kicking representative of the era of Schwarzenegger, Stallone, Aliens…and Ronald Reagan.

Of course, any successful game is going to have a sequel, and the Contra franchise continues (with some gaps) to this day. None of the sequels, with the possible exception of Super Contra (or as sensitive types renamed it, “Super-C”), match the total rawesomeness that is the original

Thanks to emulation (and the game industry’s constant fetish for repackaging), Contra can be played on almost any system from PC to Wii

There have been all sorts of remakes & I must state for the record that I do not think they were all worthy of the title. I am, unfortunately, not involve with the business model of any major gaming company. Therefore I am at their mercy with what they decide to release. Luckily there are not too many terrible releases to mention. Some of the other classic titles did not fare so well when discussing follow ups to the flagship. I played some bad sequels because I loved the original.